I saw the video posting of John swimming across the pool and it was awesome!  His accomplishments are now being recognized by some of the best swimmers in the world!

Here are some encouraging photos of American Olympic swimmers in Spain at the World Championships.   Ricky Berens (pictured in both photos) has been a longtime supporter of Tyler’s Treehouse, which funds pediatric brainstem glioma research at St. Jude.  He reached out to his team mates, who gladly stepped in to support and encourage John Bradley. 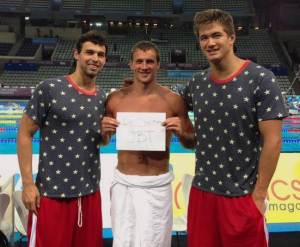 We’ll continue to have y’all in our thoughts and prayers.

This site is intended to provide family and friends of John Bradley Thompson with information about John's fight against DIPG, as well as provide a place for everyone to share their memories and provide courage, spirit, and love.

We are so proud to have joined forces with The Cure Starts Now, a foundation focused on funding laboratory and clinical research aimed at understanding and ultimately curing DIPG. Please click on the logo to be directed to the CSN website.